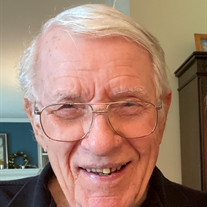 Theodore Kendall Oberteuffer, age 84, of Ocala, Florida, passed away peacefully on July 25, 2021. Ted was born in Wembley, England on May 7, 1937. He moved with his adoptive parents, Delbert Oberteuffer and Kay Hersey Oberteuffer, to the United States in 1939. He attended University High school, graduating in 1955. He lettered in swimming and football. He went on to earn a BA in English from Amherst where he continue his football career as a half back. Ted was an Army veteran and trained as a medic at Fort Sam Houston. His first job after college was at Seiberling Rubber in Akron, Ohio working as a trainee in the Cap shop and Accounting. His next job was as an insurance agent for New England Life where he met his first wife, Janet Lee. Robert Kendall, his first son, arrived in 1961 and then in 2 year intervals, Jon Hersey and Susan Lee. He worked for 26 years for GTE and then found his true vocation in teaching. Ted expressed to many that he loved the look on his student's faces when they understood something and connected it to other things they knew. He worked another 25 years teaching a variety of technical core subjects. Ted received honors and awards including a commendation for swimming to the rescue of residents of a nursing community stranded during a flood. He was very involved with the Kiwanis Club of Ocala, serving as historian, writing and producing publication of the weekly Sinawik newsletter, as well as serving as a Trustee for Camp Kiwanis. Ted had a wonderful singing voice, and many of his best times were singing and playing guitar, as well as performing in musical groups, oratorio societies and musical theater. Ted is survived by his children, Robert Kendall Oberteuffer, Millersville, Maryland; Jon Hersey Oberteuffer, Gainesville, Florida; Susan Lee Mitchell, Ocala, Florida; his eight grandchildren and grandson. He was preceded in death by both parents and his first wife, Janet Oberteuffer. Memorial donations may be made to Camp Kiwanis of Ocala to help the children of Marion County go to summer camp.

Theodore Kendall Oberteuffer, age 84, of Ocala, Florida, passed away peacefully on July 25, 2021. Ted was born in Wembley, England on May 7, 1937. He moved with his adoptive parents, Delbert Oberteuffer and Kay Hersey Oberteuffer, to the United... View Obituary & Service Information

The family of Theodore Kendall Oberteuffer created this Life Tributes page to make it easy to share your memories.

Send flowers to the Oberteuffer family.