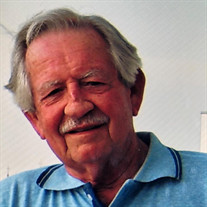 Richard Allen Kingwell, husband of Patricia B. Kingwell, passed away at home on Sunday, September 5, 2021. Born in Clarksburg, West Virginia, he was the son of the late Harold G. and M. Helen Kingwell of Ocala, FL. He is preceded in death by his late wife, Nada Husteck Kingwell who passed away in 1998 and his brother, Robert Kingwell who died in 2005. An avid sports fan, he grew up in Dayton, Ohio, then moved to Pennsylvania. After graduating from Barnesboro High School in PA he entered the United States Air Force, serving from 1953-1957. He began his flying career delivering private airplanes across the United States, then became a commercial airline pilot for Eastern Airlines for 28 years. While working for Eastern Airlines, he and his wife, Nada, and their three daughters moved to Ocala from Miami and in 1971 built their first horse farm, 'Pride and Joy Farm,' on Shady Road. There they built a very successful business of breeding and training thoroughbred horses for racing and sales. They later built a larger farm also on Shady Road. They were well-known and respected in the thoroughbred horse business. Kingwell and Patricia, his wife of 23 years, loved traveling around the USA and Canada and enjoyed cruises, traveling to Alaska, Italy, Greece and the Greek Islands. They also enjoyed summer vacations in Maine. He was well-known for his sense of humor and quick wit. He was so loved by all who knew him. He was a gentleman and a gentle man. In addition to his beloved wife, Patricia, he is survived by three daughters: Debbie (Bill) Browder of Ocala, Donna (Douglas) Shelton of Morriston, and Diane (Greg) Tabor of Ocala and a sister, Sue Hale of Ocala. Three grandchildren survive him - Kristy (Alex) Alvarado of Panama City, FL, Gregory (Alisha) Tabor, Jr., and Kasey (Durrell) Tabor Nelson of Ocala, and also four great-grandchildren: Briana, Brenden, and Brody Alvarado and Rayden Tabor. Surviving also are three nephews -Tom Hale, David Kingwell, and Kenneth Kingwell. He is also survived by five step-children,- John, Kevin, Robert and James Henkel and Susan Henkel Lamkins. Seven step-grandchildren - Amelia, Kevin, Maxfield, Chloe, Alexander Henkel, Zara Henkel Russell and Joshua Lamkins and one sister-in-law, Barbara, who all loved him dearly. In lieu of flowers, a contribution may be made to Humane Society of Marion County, 701 NW 14th Road, Ocala, FL 34475 or to Marion County Hospice, 3231 SW 34th Ave., Ocala, FL 34474

Richard Allen Kingwell, husband of Patricia B. Kingwell, passed away at home on Sunday, September 5, 2021. Born in Clarksburg, West Virginia, he was the son of the late Harold G. and M. Helen Kingwell of Ocala, FL. He is preceded in death by... View Obituary & Service Information

The family of Richard Allan Kingwell created this Life Tributes page to make it easy to share your memories.

Send flowers to the Kingwell family.