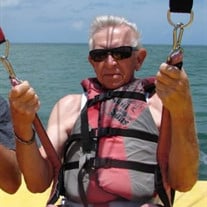 Ralph D. Gardner, Jr., age 83, of Ocala, FL, previously of Wareham and Randolph, MA, passed away peacefully in his sleep in the early morning hours of December 6, 2021. He is preceded in death by his son, Patrick, granddaughter, Maria, great-grandson, Finn and his beloved dog, Brianna, who left this world just long enough before him to make sure his recliner would be good and ready when he joined her. Born in Flint, MI and raised in Randolph, MA, Ralph graduated from Randolph High School class of 1955 where he met many lifelong friends, but most importantly, the woman who would keep him on his toes and love him unconditionally until the very end. Always up for adventure, he joined the Merchant Marines, acquiring a taste for exotic foods and seaborn tattoos. A natural leader, he rose to the ranks of Captain, eventually commanding his own vessel, the Constitution, until his retirement. During those years at sea, his crew was a second family and there was a part of his heart that always stayed on the open ocean. One would think being a Captain in the Merchant Marines would be a tough feat to top, but there was no question what Ralph was most proud of: his family (and perhaps his golf game). He leaves behind his soulmate, his better half and wife, Micki. Their love and devotion to one another transcends words and will continue to inspire their family for generations to come. Missing him forever are his sister, Judy, daughters Deb (Jim), Kim (Bud) and Lyn (Frank), grandchildren Jesse (Jessica), Clayton (Laurel), Shana (Jarod), Katelyn (Randy), Coreylyn (Chris) and Amanda (Matt), as well has great-grandchildren Coby, Jaxon, Joshua, Khloe, Declan and Jarod, Jr. After a part of him sets sail in Clearwater, FL, Ralph will take one last ride up his beloved Route 95 and finally rest with his son in Blue Hills Cemetery. No services are planned at this time because he's too busy golfing and smoking a Cuban cigar. In lieu of flowers, root for the Red Sox and please consider making a donation in Ralph's name to the Hospice of Marion County https://www.hospiceofmarion.com/donate

Ralph D. Gardner, Jr., age 83, of Ocala, FL, previously of Wareham and Randolph, MA, passed away peacefully in his sleep in the early morning hours of December 6, 2021. He is preceded in death by his son, Patrick, granddaughter, Maria, great-grandson,... View Obituary & Service Information

The family of Ralph Dudley Gardner Jr. created this Life Tributes page to make it easy to share your memories.

Send flowers to the Gardner family.