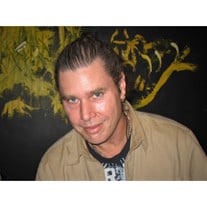 OnAugust 5, 2018, David Harold Firebaugh, a talented artist and retired businessman, passed away atthe age of 54. David was born on June 12, 1964,in Wayne, Michigan to Harold and Norma Firebaugh.As a child he was amember of theCub Scouts. He played baseball, studied judo, and in 1974, at theyoungage of 10, David became a certified diver. His instructor told our family that at the time, David was the youngest person in Florida to pass the certification testand there were adults in the same class that didnt pass. Davidgraduated from Kathleen Senior High School in Lakeland, Florida in 1982.He worked in the restaurant industry, and spent time working for his Uncle Dale and Aunt Jackie Firebaugh in their family business.Later, he was a business partner at Animal Designs, Inc., an imprinted sportswearcompany whereheworkedtogetherwith his mother and sister. Davidwasa screen printer, an artist and a salesman traveling to trade shows to promote the design line.In 1998, David retired and focused on his interests in drawing, painting and woodworking. David was a good,compassionate,andextraordinarilygenerous person.I remember one winter asking him where his jacket was. He said he was out walking and met someone who was cold, so he gave ittothem. Davewas also a lot of fun and had some great dance moves. He loved cats and fed and shelteredthe neighborhoodstrays. He was deeply moved by nature, and many times would sit outside by the lake in his backyard enjoying the view. David was a Christian, and had a particular love for the Methodist Church, which he was raised in from childhood. David was preceded in death by his father, Harold Lee Firebaugh, and his mother, Norma. He is survived by this sister, Tami Firebaugh Waters, his Brother-in-Law, Rudy R. Waters, II, and his nephew, John Waters.He is deeply loved, and we miss him dearly. Davids Memorial Service will be held on August 18, 2018, at Roberts of Ocala Funerals and Cremations Downtown Chapel, 606 Southwest 2ndAvenue, Ocala, Florida34471, phone number(352) 537-8111. The viewing is at 9:00 am and the service is at 10:00 am. Following the service will be a luncheon. The graveside service will be held at the Silver Hill Cemetery in Frostproof, Florida at 3:00 pm. David will be buried next to his mother, in the same cemetery where his GrandpaJohn V. Bentleyand GrandmaBeulahBentleywere laid to rest.

OnAugust 5, 2018, David Harold Firebaugh, a talented artist and retired businessman, passed away atthe age of 54. David was born on June 12, 1964,in Wayne, Michigan to Harold and Norma Firebaugh.As a child he was amember of theCub Scouts. He... View Obituary & Service Information

The family of Mr. David Harold Firebaugh created this Life Tributes page to make it easy to share your memories.

Send flowers to the Firebaugh family.