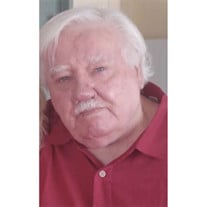 James (Jim) Brown, Silver Springs, FL, passed away at home on Dec 10, 2019. Jim was born in East Chicago, Indiana on June 20, 1943 to Rozella and William Brown. He graduated from Roosevelt High School and began a career at Inland Steel. Jim met Sandy during his time as a Gary policeman. Sandy was a clerk at a convenience store and Jim visited daily. After his marriage to Sandy, he lived in Monticello, Indiana where he was a real estate broker for 25 years, most recently as the owner and operator of Stefaniak Real Estate until he retired to Florida in 2010. During his retirement, Jim pursued all of the hobbies he had put off for years, including building model ships and collecting vintage fishing reels, until Sandy had to limit his Ebay usage. In 2011, Jim accomplished his goal of publishing a book. Amazon published Kiss the Girls and Made Them Cry as well as his second book, Drum in 2013. He will be remembered by his family and friends for his love of reading, and passion for his kids and grandkids little league baseball careers. His weekend wasnt complete without a day at the baseball diamond and he loved the time he spent traveling with their teams all across the country. Jim was honest, hard-working and generous to a fault. His greatest vice was spoiling the kids, and enjoying a donut, or 12, with his morning coffee. Jim is survived by his wife Sandy, daughter Louise (Jeff) Feliszak, and sons John (Sara), Jimmy, Bobby (Rochelle) and Billy (Sarah); brother William (Dory) and sister Betty Ann (Ray) Dikun; niece Juanita (John) Sheely; and grandchildren Kaitlyn, Jillian, Kilen, Averie, Landen, Zander, River, Violet, Ruby, Maleah, Peyton and Jaxon. He will be missed by numerous nieces, nephews and extended family. He is preceded in death by his father William, mother Rozella, brother Bob and sister Auntie Kate. Sandy asks that in lieu of flowers, donations be made to the American Cancer Society (www.cancer.org).

The family of James D Brown created this Life Tributes page to make it easy to share your memories.

Send flowers to the Brown family.