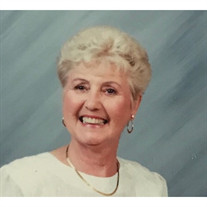 Barbara V Martin, unexpectedly passed away from a cerebral hemorrhage on August 29, 2018 at West Marion Hospital, Ocala. Barbaras daughters, Dorothy, Christine and Frances and son-in-law Virgil were at her bedside as she passed into Gods loving arms. Barbara was born on July 15, 1930 to Anthony and Dorothy (Marquardt) Petrino in Belmont MA. She was the wife of David F. Martin, Sr. (dec. 2007) and they raised 5 children. Being the wife of a career military man, Barbara lived abroad and stateside giving her a wide range of experiences, cultures and lifestyles. Her travels took her from France, Germany, the Azores, Iran and places in between. Stateside, she lived in North Carolina, Kentucky, Nebraska, Virginia, Louisiana, Texas and finally retirement in Florida. Barbara furthered her education by taking a course in Interior Design via mail. She loved design and worked in furniture and clothing stores where she applied her skills. At one childrens store that she manage, she assisted Marie Osmond with her purchases. Another anecdote, was while shopping at the military base in the Azores she met President Eisenhower. Barbara was an excellent homemaker and enjoyed cooking, sewing, and designing her many homes. Over the years she made ceramics, painted, and acted in a couple plays. In her later years, Barbara read, solved 100s of cross word puzzles and played board games. She had a can do attitude, was strong, intelligent and a beautiful woman. Barbara was devoted to her family and was loved and adored by them. Barbara loved her retirement years and lived in the On Top of the World community in Ocala, Fl spent with her friend and companion Stanley Skylondz. She was active until the day of her death. Barbara is survived by her children, Dorothy M Kreder (Virgil), David F Martin, Jr. (Sally), Christine A Holt, Frances Mary Black (Stacey), her Sister Dolores, an aunt Susie Hoogendoorn, 12 grand children, 17 great grand children and nieces, nephews and cousins. She is predeceased by her parents Anthony and Dorothy Petrino, son Daniel J. Martin, daughter-in-law Deborah Martin, and David F. Martin, Sr. Everyday is a blessing, and Barbaras life was a blessing to her family and friends. Her passing was too soon and her family will miss her greatly. A celebration of life and burial with be held at a later date in Belmont, MA.

Barbara V Martin, unexpectedly passed away from a cerebral hemorrhage on August 29, 2018 at West Marion Hospital, Ocala. Barbaras daughters, Dorothy, Christine and Frances and son-in-law Virgil were at her bedside as she passed into Gods loving... View Obituary & Service Information

The family of Barbara Martin created this Life Tributes page to make it easy to share your memories.

Barbara V Martin, unexpectedly passed away from a cerebral hemorrhage...

Send flowers to the Martin family.