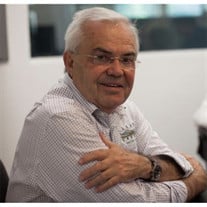 William C Dennis Jr., Business Executive and Entrepreneur, Dies at 74 Bill Dennis was born in Miami Beach, Florida, on November 4th 1943. His parents were raised in the Texas panhandle and he spent most of his childhood in Lubbock, Texas, home to one of his favorite musicians, Buddy Holly. Bill received his undergraduate degree from Texas Tech University. He married Katharine Finley on May 28, 1966, and soon after they headed to Thunderbird School of Global Management in Phoenix, AZ, where he completed a graduate degree in business. Despite having grown up in a small town, his curiosity and adventurous nature led him to travel and explore many other countries and cultures. His passion to explore the world led him to travel the globe and live in El Salvador, Brazil, and Argentina to name just a few. Bill could tell a joke in Spanish or Portuguese as easily as he could in his native Texas drawl. Some of his proudest achievements came later in his career. From 2001 through 2015, Bill was the CEO of Latin American Operations for Laureate Education. During his tenure at Laureate, he and his colleagues acquired Universities and built higher learning centers to benefit communities throughout the Americas. When he retired, Laureate was the largest for-profit Education company in the world, due largely to their success in Latin America. In order to acknowledge Bills impact on global education, Laureate established The William C. Dennis Jr. Scholarship for International Studies in his honor. Bills passion and energy was undeniable, and retirement was never an option. After Laureate, Bill decided to return to his family heritage in cattle farming. He began raising Wagyu cattle in 2013 and expanded into olives and olive oil in 2015. He was passionate about music and art and was involved in establishing the Reilly Arts Center, a new flagship for arts and culture, in downtown Ocala. Whether it was his businesses, his travel, his love of the arts or his family, Bill did everything with passion and with a plan to always makes things better. He left an indelible impression on all who knew him and his accomplishments and generosity will never be forgotten. Bill passed away on the morning of July 28, 2018 surrounded by his loved ones. He is survived by his wife of 53 years, Katharine Finley Dennis, his daughter, Jessica Hope Dennis-Capiraso, his son William Chowning Dennis, III, his son-in-law Michael Capiraso, daughter-in-law Megan Dennis, his three granddaughters, Gwynne Grace Capiraso and Piper Dennis, and his sister, Susan Dennis Skipper. A Celebration of Life will be held on Saturday, August 4, 2018 at 2:00pm in the Reilly Arts Center with interment to follow in Highlands Memorial Park Cemetery. Following the interment the family would like everyone to join them for a reception at Clear Creek Farm, 9501 West Highway 326, Ocala, FL 34482 In lieu of flowers, the family is requesting any donations be made to the Reilly Arts Center at www.reillyartscenter.com.

William C Dennis Jr., Business Executive and Entrepreneur, Dies at 74 Bill Dennis was born in Miami Beach, Florida, on November 4th 1943. His parents were raised in the Texas panhandle and he spent most of his childhood in Lubbock, Texas,... View Obituary & Service Information

The family of William Chowning Dennis created this Life Tributes page to make it easy to share your memories.

Send flowers to the Dennis family.