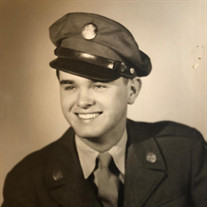 Walter C. Baird, Jr., 91 of Ocala, Florida, passed away peacefully surrounded by his family on February 10, 2022. Walter was born in Glenville, NY to Walter Baird and Dorothea (Moseman) Baird on December 8, 1930. He entered the United States Air Force, New Year’s Eve, December 31, 1947, where he served for six years. After his honorable discharge he lived in Shreveport, LA, and then came home to NY where he started a long career as a truck driver with Ft. Edward Express working alongside his dad. Shortly after, he met Charlotte and they were married on November 16, 1957. Living in South Glens Falls and then Ft. Edward, NY they raised four (4) children; Kathy, Sonny (Walter III), Paul, and Mark. Walt’s favorite pastimes were taking his family camping, bowling on the company’s team, home improvements, and tinkering on vehicles and other home projects. In 1974, they moved to Ocala, FL, where he began a career an eventually opened his own automotive front-end repair and radiator shop. He later worked for E-One and retired in 1994. After retirement, he returned to E-One as a tour guide until he finally decided to retire full-time. He spent the rest of his years enjoying spending time with his family. Walter is survived by his four children: Kathy (Tom), Sonny (Walter III), Paul, and Mark (Penny). Grandchildren; Megan, Buddy (Walter IV), Krista, Victoria (Evan), Emma (Trent), Paul Jr., and Ian. Great-Grandchildren; Conner and Noah. He was preceded in death by his wife of 62 years, Charlotte (Roberts) Baird, his brothers Clifton (Kip) Baird and Kenneth Baird, his grandson Scott Matthew Baird. Funeral service will be held at Blessed Trinity Catholic Church on Friday, February 18th at 1:00pm. Burial will follow at Highlands Memorial Park in Ocala, FL. Visitation will be held at Robert’s Downtown Chapel on Thursday, February 17th from 4 – 7pm. At 5:30, there will be a military honor presentation by the United States Air Force.

Walter C. Baird, Jr., 91 of Ocala, Florida, passed away peacefully surrounded by his family on February 10, 2022. Walter was born in Glenville, NY to Walter Baird and Dorothea (Moseman) Baird on December 8, 1930. He entered the United States... View Obituary & Service Information

The family of Walter Claude Baird Jr. created this Life Tributes page to make it easy to share your memories.

Send flowers to the Baird family.