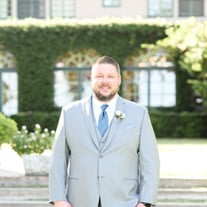 Michael Kevin Hall Jr., 37, of Ocala, FL, passed away on August 6th, 2021, in Ocala, FL. Michael was born in Jacksonville, FL to Michael Sr. and Pamela Hall on January 19th, 1984. A big part of Michaels childhood was his active involvement in Biltmore Baptist church with its lifelong members. He graduated from Vanguard High School in Ocala, FL in 2002. He currently worked for Closetmaid as a Territory Account Manager. Michael was a dedicated Jacksonville Jaguars and Florida Gators football fan and spent many weekends grilling and spending time with his family and friends. Michael carried many titles such as devoted fiancé, father, son, brother, nephew, cousin, friend, "Unk Mike", "Golden Child" and the "Grillmaster". Michael is survived by his loving fiancé, Brandy Stodghill; daughters, Emily and Brooke Stodghill; mother, Pam Hall; sisters, Brittany Hall (Sean) and Courtney Rabitaille (Patrick); Nieces, Aubrey Wilson, Kyndall and Lainey Reade; nephew, Alexander Rabitaille and many extended family members and friends. Michael is preceded in death by his father, Michael Hall Sr; grandparents, Gene and Marjorie Crews and Charles and Minnie Hall. The family will receive friends from 11-12 pm on August 12, 2021 at Roberts of Ocala Funerals and Cremations (Downtown). Funeral service will be held directly after at 12 pm. Burial will then follow at Mill Creek Cemetery in Hilliard, FL. We are requiring masks to be worn and asking family and friends to wear Jaguar or Gator colors in honor of Michael. Michael touched many lives, and his loss has left a hole in the hearts of his family and friends. Arrangements entrusted to: Roberts of Ocala Funerals and Cremations, 606 SW 2nd Ave, Ocala, Fl. 34471.

The family of Michael Hall created this Life Tributes page to make it easy to share your memories.

Send flowers to the Hall family.