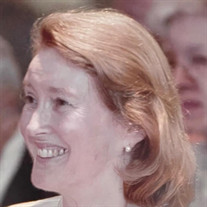 Mary Louise DeWolf, a second-generation Floridian, was born in Crescent City Florida on April 9, 1931, the fourth and last child of Nettie Louise Holley DeWolf and Levant Prior DeWolf, Sr. Since 2017, she resided at The Windsor of Ocala and passed peacefully on April 26, 2022. She was the valedictorian of her senior class in Crescent City High School, the same high school from which her parents had graduated. She was the pianist and organist of the First Methodist Church for four years, and the captain of the All Star basketball team in the St. Johns Conference in her senior year. After attending Florida State University for three years, she transferred to the University of Florida where she received her Bachelor's and Master's Degrees in the field of Science Education. While at FSU, Mary Louise played piano for physical education dance classes. At UF she was a student assistant in the music department where she accompanied voice students and played for summer musical productions. She also played the organ for Sunday services at the Wesley Foundation and was active in the Sigma Kappa Sorority. Following graduation, Ms. DeWolf taught physical education in Sebring, FL, and biology and chemistry for 29 years in other schools in Florida, England, Georgia, and California. During these years she and her late husband Harold (Bud) Evans were Co-Founders of the Unitarian Universalist Church of Valdosta, GA; organizer of the Southeast Winter Institute in Miami (SWIM); President of the Unitarian Universalist Society in Sacramento, CA; Membership Chair, Vice President and President of the Unitarian Universalist Congregation in Miami; and member of the Florida District board of the Unitarian Universalist Association. This was followed by teaching biology at three Community Colleges in Jacksonville, FL. She and her husband, Rev. John DeWolf-Hurt, served eight years as Co-District Executives of the Unitarian Universalist Association in the Florida District and the western half of the Mid-South District from Nashville, TN to New Orleans, LA. During this time, while based in Ocala, she began her studies for the Unitarian Universalist ministry. After retiring from the Co-District Executive position and the death of her husband, John, she continued her studies while preaching at various UU churches within Florida. In 2000 Ms. DeWolf married Robert L. Campbell. In 2001, Rev. DeWolf was ordained in the Unitarian Universalist ministry by the Unitarian Universalist Fellowship of Marion County, and received her second Master's degree, this time in Religious Studies at USF. In 2003, she became the part-time minister at Nature Coast Unitarian Universalists in Citrus Springs and served for seven years while volunteering with the Citrus Democrats. This was followed by being awarded Minister Emerita, and publishing her book, A Cracker Gal Finds Religion. Rev. DeWolf was preceded in death by her husband Bob in 2015. She is survived by her sister, Grace D. Trice, Ocala, FL; step-son Gifford Campbell, wife Michele of Salem, MA; step-son Randy Hurt, wife Kathy of Ellijay, GA; and nine nieces and nephews. A memorial service is planned for June 4 at 11:00AM at Roberts Downtown Chapel, 606 SW 2nd Avenue, Ocala, Florida 34471. In lieu of flowers, donations may be made to Hospice of Marion County or Nature Coast Unitarian Universalist at Citrus Springs, Florida.

Mary Louise DeWolf, a second-generation Floridian, was born in Crescent City Florida on April 9, 1931, the fourth and last child of Nettie Louise Holley DeWolf and Levant Prior DeWolf, Sr. Since 2017, she resided at The Windsor of Ocala and... View Obituary & Service Information

The family of Reverend Mary Louise DeWolf created this Life Tributes page to make it easy to share your memories.

Mary Louise DeWolf, a second-generation Floridian, was born in...

Send flowers to the DeWolf family.