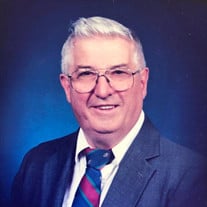 Kenneth Lee Tingley, age 85, of Ocala, FL, passed away peacefully on April 22, 2022 in hospice care in Ocala, FL. Kenneth was born in Dorchester, New Brunswick, Canada to Lee Anderson Tingley and Etta Abigail (Branscombe) Tingley on January 7, 1937. Kenneth went to high school at Atlantic Baptist in Moncton, New Brunswick and went on to earn a degree in Religion from New Brunswick Bible Institute. Although he initially began his career as a minister in Maine, he worked most of his life, over 30 years, as a machinist/inspector for Emhart Glass Corporation in Windsor, CT. He was most passionate about studying the Bible and loved to share his thoughts and learnings with those he came in contact with. He devoted most of his life to sharing his love for God, especially, wanting everyone to know the way of salvation through Jesus Christ and as he aged, in his later years, longed to be in heaven with his Savior. Kenneth was deeply involved with his church, Westpoint Baptist Church, which he helped to start, serving as a deacon and associate pastor. In addition, he also loved to read westerns, watch old TV shows, and spend time with the love of his life, Rebecca. He is remembered dearly by his children for being a wonderful father and family man. He took his family on numerous camping trips in the summer that often included trips back to Canada to visit family. He also taught his children to ice skate at the local American Legion ice rink. His daughter, Lynne, taught him to swim, which became a regular after work past-time in the summer at the local lake. He had an infectious laugh, bore a quiet, kind, and sweet spirit, and loved to be included in social and family gatherings where he always had a story to tell about his life and experiences. His grandchildren remember that he taught them all to drive a stick shift in his old red Toyota truck and took them on trips to visit family in Canada as well during the summer when he and Rebecca helped to babysit while their parents were working. He was very proud of his family and how accomplished they became in their lives and careers. Kenneth is survived by his wife Rebecca Meredith (Hill) Tingley of Ocala, FL. He is also survived by his children, Lee Anderson Tingley (Deborah Tingley), Lynne Tingley (Bruce Fournier), and Thomas Tingley (Laura Tingley); his grandchildren Danielle Noe (Sean Noe), Jordan Welner (Vanessa Tencati-Welner), Erika Smith, Michael Tingley, Nicholas Tingley, and Sara Amos (Joshua Amos); his great grandchildren, Hannah Taylor, Violet Noe, Blaze Noe, Christopher Smith, Benjamin Smith, and Everlee Amos; his brother, Stuart Tingley, numerous brother-in-laws, sister-in-laws, nieces, and nephews. He is preceded in death by his parents, four sisters (Dorothy DeVarennes, Jenny Crossman, Joyce Hacker, and Lois Laughren), and a grandson, Randall Welner, Jr. A memorial funeral service will be held at Westpoint Baptist Church, 11525 W. Highway 40, Ocala, FL at 1:00pm on Thursday, April 28, 2022. The burial will be held at a later date in East Corinth, ME. In lieu of flowers, memorial donations may be made to Westpoint Baptist Church at the above address.

The family of Kenneth Lee Tingley created this Life Tributes page to make it easy to share your memories.

Send flowers to the Tingley family.