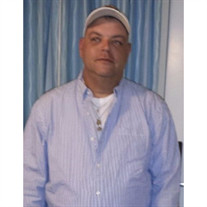 Mr. Kenneth Kenny Allen passed away unexpectedly on Tuesday June 19, 2018 at the young age of 48. Kenny was born on September 24,1969 in Sunnyvale, California to parents Carl Martin and Barnice Vaughan. He was a mechanic that could fix anything that came his way. In his later years Kenny eventually began working for the United States Postal Service as a rural letter carrier. Kenny was an avid bow hunter, but he had a definite love for fishing. However, above all else Kenny can be described as a family man. He loved spending his time making memories with his family. Kennys memory will forever be cherished by his wife Patricia Trish Allen who loves him unconditionally, his mother Barnice Vaughan, and his father Carl Martin (Constance). His children: Erin Leigh Allen, Brandon Lee Allen, Allison Nicole Allen, and Chase Alexander Allen are sure to keep his memory alive. Kenny also leaves behind 6 Grandchildren who loved him dearly: Calvin Hall, Izabella McDonald, Brayden Hall,DiMarcoMcDonald, Tristan McDonald, andJhakei McDonald. Kenny also leaves behind his Aunt Jessie Lynn Barnard, along with his siblings: Shawn Allen, Thomas Martin, Matthew Martin, Jerry Vaughan Jr., Christopher Vaughan, Timothy Vaughan, Raymond Valois, and Michelle Brown. The family would like to invite everyone to a visitation to receive friends on Thursday June 28thfrom 4pm-6pm at Countryside Presbyterian Church located at7768 SW State Rd 200 Ocala, FL 34476. The family would also like to invite everyone to attend the funeral service to celebrate Kennys life also on Thursday June 28thimmediately following the visitation at 6pm. There will be a private Graveside service for the family to lay Kenny to rest at a later date at the Belleview Cemetery. Everyone is encouraged to sign Kennys online Guestbook and leave a word of encouragement for the family atwww.Robertsfunerals.comThe family entrusted Kennys final arrangements to the care of Roberts of Ocala Funerals Cremations Downtown Chapel.

Mr. Kenneth Kenny Allen passed away unexpectedly on Tuesday June 19, 2018 at the young age of 48. Kenny was born on September 24,1969 in Sunnyvale, California to parents Carl Martin and Barnice Vaughan. He was a mechanic that could fix anything... View Obituary & Service Information

The family of Kenneth Lee Allen created this Life Tributes page to make it easy to share your memories.

Send flowers to the Allen family.