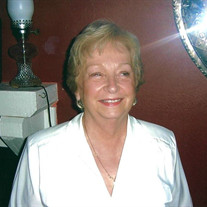 Karen Vincent Stump age 79, of Williston passed away peacefully Monday November 29th surrounded by her children and grandchildren. , She was born August 27, 1942, in Clarksburg West Virginia, the only child of Doyle and Margaret Vincent. She grew up close to her grandparents, aunts and uncles, and cousins in, almost idyllic, rural small-town 1950's. She graduated from Shinnston High School in 1960 and from Marshall University in 1964 with a Bachelor's degree in Education. After Graduation she married Michael M. Stump (later divorced). They had three children. In 1975, (long before anyone had heard of Starbucks in Florida) she opened and operated one of the first gourmet coffee and tea shops in central Florida. The Coffee Mill in Gainesville, Florida (Butler Plaza) and later opened a second location The Cookery in Ocala, Florida (The Cascades then moved to The Paddock Mall). She then went on to graduate from CFCC and became a Registered Nurse and started a long career in nursing. Even in retirement Karen was a living example of lifelong learning. Standing 4'11" she had no fear traveling the country in her Class A motor home and traveling the world on educational tours feeding her voracious appetite to seek out the (sometimes hidden) truths of our history. She was passionate about politics and pushing back against the mainstream. Her lifelong vitality and wisdom made her the first person one would consult with in difficult times. She did not spend her time on what she thought trivial or silly. She cherished spending time with her family,and soaking up a pretty day on her porch with her dogs. She is survived by her three children: Mamie Elizabeth (Libby) Flechas, Williston; Sara Stump Goldberg, Orlando; and Michael Vincent Stump (and wife, Janet), Friendswood, TX. She has six grandchildren: Hershel George Flechas, Ocala; Michael Hammond Stump, Friendswood TX; Emma Margaret Goldberg, Orlando; Brian Miller Goldberg, Orlando; Lily Ann Goldberg, Orlando; and Savannah Elizabeth Stump, Friendswood Tx. May she truly rest in peace following a beautiful life!

Karen Vincent Stump age 79, of Williston passed away peacefully Monday November 29th surrounded by her children and grandchildren. , She was born August 27, 1942, in Clarksburg West Virginia, the only child of Doyle and Margaret Vincent.... View Obituary & Service Information

The family of Karen V Stump created this Life Tributes page to make it easy to share your memories.

Send flowers to the Stump family.