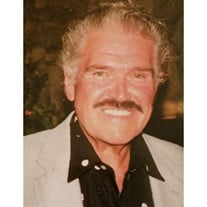 Joseph Joe G. King (95), of Saratoga Springs, N.Y. joined Our Lord in heaven on Tuesday June 26, 2018 in Ocala, Florida. Joe was born at the family home on Elm Street in Saratoga Springs, New York on December 8, 1922, the last child of John Papa King and Catherine Coyne King. He attended St. Peters Elementary School in Saratoga Springs, then transferred to LaSalle Military Institute in Troy making the daily train trip between Saratoga Springs and Troy. He graduated in 1940 with a letter in cross country track. From the age of 12, he worked in his families restaurant, Kings Caf, on Broadway in Saratoga Springs. Upon graduating from the Military Academy, he continued to work at the restaurant and dove head first into his passion for horses at the family farm. His passion ran so deep that they used to take wild horses right off the train on Railroad Avenue and drive them out Washington Avenue where he developed his skills as a bronc rider, breaking and training horses. Over the summer of 1939 he rode the rodeo circuit and was awarded the top bareback bronc rider for the year, earning him a large silver belt buckle. It was just after this, that Joe met Catherine Rita Severino, his future wife and the love of his life. It was truly love at first sight for them both, and a wonderful courtship evolved and was deepened through letters and correspondence while Joe was enlisted in the United States Marine Corps. Joe and Rita decided to wed in 1944, and their first daughter Candace came along a year later. Joe honorably discharged from the Marines in 1946 as a Corporal. He was most proud of his military service by teaching aviators at the University of Chicago to use the newly developed gun sights for battle in the Pacific theater. Once back in Saratoga Springs he continued to work at the family restaurant and clubs, which included Newmans and Rileys Lake houses until the mid 1950s. It was during this time that Joe and Rita welcomed other children Cordelia Cordy, Marikate and Joseph Bro to the family. In 1953 Joe moved his family from their house in town to Ritas family home on Locust Grove Road. Soon after moving in, the garage was turned into a horse barn, which fueled a passion among the King family. This passion led to the establishment of Locustwood Farm where Joes family began producing National Champions Arabian horses. After settling in at the farm, Joe decided to leave the family restaurant business and begin a new career with the New York State Parks Recreation and Historic Preservation Department, at the Saratoga Spa State Park. After more than 35 years with the State, Joe retired and began traveling with Rita. Joe was preceded in death by both of his parents, his wife Rita of 69 years, his brothers John and Gerard, his sister Bernadine, his son Joseph Bro, his daughter Cordelia Cordy, and his great granddaughter Kirsten. His memory will forever be cherished by his daughters Candace King of Clover, SC and Marikate (Mark) Matthews of Ocala, Fl; his son in-law Gregory Schwartz of Saratoga Springs; his granddaughter Cara (Roy) Senger of Wilton, NY, his grandsons Nicholas (Lisa) Schwartz of Saratoga Springs, NY, Christian Schwartz of Ballston Spa, NY and Robert Rollick of Key West, Fl; his great grandchildren Steven Najdek, Maggie Schwartz, Peter Schwartz and his great-great granddaughter Kateri Clear; as well as numerous nieces and nephews throughout the US. A Mass of Christian Burial will be held at St Clement Church on September 10, 2018 at 10am with a family burial at St Peters Cemetery where Joe and Rita will be buried together, inseparable as they were in life. In lieu of flowers, any memorial donations should be sent to Hospice of Marion County or Saratoga War Horse Foundation.

The family of Joseph Gerard King created this Life Tributes page to make it easy to share your memories.

Send flowers to the King family.