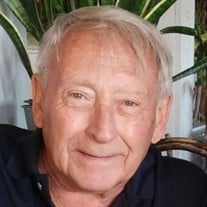 John H. Holland (Papa), 81, of Ocala Florida, passed away on Sunday, January 16th. He is survived by his loving wife Ida Holland, sons Garret (Valerie) Holland, Derek Holland, Barry Stewart, Keith (Shannon) Stewart, and daughter Virgie Krirkendall. John was also blessed with 7 grandchildren: Kaitlin Holland Daff (Joey), Kristin Holland, Jake Stewart, Myles Stewart, Emily Stewart, Ashleigh Stewart, Miranda Kirkendall, and recently a great-granddaughter, Ella Michelle Daff. John graduated from the University of Wisconsin, Oshkosh in 1962 with a B.S. degree in Music. He also graduated from the Navy School of Music in Washington D.C. and was a member of the distinguished 5th Army Band for 6 years. Music performance was his lifelong passion. John will be greatly missed from the performing arts scene in central Florida as he was an active musician for 55 years. He both performed and conducted bands, including the Kingdom of the Sun Concert Band, the Southern Express Big Band, and the Ocala Festival Orchestra. He also served as the Music Director with the Ocala Civic Theater. John and his son Garret also led the John Garret Orchestra for 15 years together. They performed at many central Florida attractions including Sea World and Weeki Wachee Springs, and they were a multi-year feature at Katie Bells Music Hall. John was an entrepreneur, owning a home-building business that was featured in the annual “Parade of Homes”. He also specialized in swimming pool design and renovation. He was intimately involved in the Catholic community and was a member of the Knights of Columbus and many charitable causes. John exhibited a lifelong dedication to helping others and donated over 25 gallons of blood in his lifetime. In honor of John’s service to this great nation, he will be laid to rest in the National Military Cemetery in Beaufort, South Carolina. Papa was loved dearly by his family, and he will be deeply missed!!

The family of John Herbert Holland created this Life Tributes page to make it easy to share your memories.

Send flowers to the Holland family.