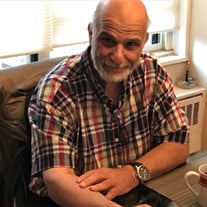 John Thomas Canterino Sr., age 70, went home to be with the Lord on December 9, 2021, after a long and courageous battle with Covid-19. He was surrounded by his loving family in Philadelphia, Pennsylvania when he passed away peacefully in his sleep. John was born in Brooklyn, New York on March 22, 1951 to his Mother, Ellen Boyd and his father Dominick Canterino. His only sibling is his younger sister, Menica. His mother unfortunately passed away early in life, so John was raised mostly by his grandparents. John excelled in everything he did; he did exceptional in school and athletics. After obtaining his bachelor’s degree in education, John married Joy “Bo” Williams and started his own family. Although John and Joy divorced many years later, they remained great co-parents to their four loving children. John went on to make his friends and family proud when he received his doctorate degree in nutrition and hospitality management. After obtaining his doctorate degree, he spent most of his life working as a college professor. During this chapter in his life, John met Wendy, his significant other whom he absolutely adored. After he left the teaching profession, John went on to work with his two sons in the restaurant industry. John lived a life that exemplified his name and in doing so left a legacy for all that knew and loved him. The doors to his home and his heart were always open. He will be remembered for his unconditional love, his forgiving nature, his inner strength, his immaculate housekeeping, his diverse wardrobe, and his passion for food. He always surrounded himself with his pets and family, which is where he felt most comfortable and loved. John is survived by his Two Sons, Two Daughters, Six Grandchildren and Sister. He will be greatly missed by his loved ones, especially by his children: John, Jr., Michael, Jessica, and Danica.

John Thomas Canterino Sr., age 70, went home to be with the Lord on December 9, 2021, after a long and courageous battle with Covid-19. He was surrounded by his loving family in Philadelphia, Pennsylvania when he passed away peacefully in his... View Obituary & Service Information

The family of John Thomas Canterino Sr. created this Life Tributes page to make it easy to share your memories.

John Thomas Canterino Sr., age 70, went home to be with the Lord...

Send flowers to the Canterino family.