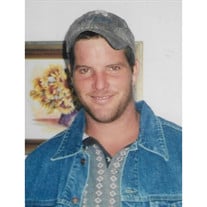 Jeremy Adam Chapin departed this life on Wednesday, December 26th 2018 at Florida Hospital in Ocala, FL. He was born in Homestead, Florida on December 6, 1976. Jeremy was called Jerbo by his friends. He was a fighter. He came into this world as a premature infant, who came home fromthe hospital on Christmas Eve 1976.He fought to survive as he was taken to the hospital on Christmas Eve 2018 . Jeremy was practically born with a fishing pole in his hand. He was the son of a commercial lobster fisherman in Key Largo where he resided until his family moved to Marion County in 1984. He spent his first summer in Marion County living a few houses from Lake Weir, next to Johnsons Beach. He lived on Lake Owen and Lake Charles in the Ocala National Forest. He loved hunting, fishing and digging for arrowheads along the Ocklawaha River. Jeremy was talented and gifted in many ways. He worked in the Concrete Industry and was at the top of his field. He was a wonderful, kind man with a big heart and a beautiful soul. He loved the outdoors, animals and people. Jeremy found God and had strong faith He is preceded in death by his Paternal Grandparents and Maternal Grandparents, Lorraine (Baker) Haywood and Joseph Baker. Jeremy is survived by his parents, Lynn Kallay of Ocala, and Jerry (Jed) Chapin and Step-Mother Happy Hornerof Scrambletown. Jeremy leaves behind Three Brothers, James Chapin, Chuck Pankow and Christopher Pankow (Tina) , Three sisters, Jill Chapin Smielski, Denise Chapin Zeintek (Mark), and Jennifer Chapin and her fiance, Corey Bishop. Jeremy had two beautiful children, Lindzee Chapin (14) and Elijah Harris (13) of North Carolina. He loved their siblings Kellee Griffith and Alyssa Harris as if they were his own. Jeremy was loved by his nephews in Ocala, Collin Chapin and Corbin Smith. He also leaves behind other nieces and nephews, aunts, uncles and cousins, not to mention many friends in the Ocala National Forest, as well as his grandfather Richard Haywood of Ocala. A Celebration of Life will be held on Saturday, January 19, 2019 at the Ocala Boat Basin aka Ray Wayside Park on East Hwy 40 from 12:00 -3:00 pm. All friends are welcome to Celebrate Jeremys life and to celebrate that he is now at Peace with God.

Jeremy Adam Chapin departed this life on Wednesday, December 26th 2018 at Florida Hospital in Ocala, FL. He was born in Homestead, Florida on December 6, 1976. Jeremy was called Jerbo by his friends. He was a fighter. He came into this world... View Obituary & Service Information

The family of Jeremy Adam Chapin created this Life Tributes page to make it easy to share your memories.

Send flowers to the Chapin family.