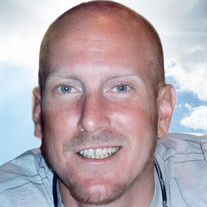 Jeffrey “Jeff” Michael Proctor, 43, passed away unexpectedly on September 12th, 2021 at his home in Ocala, Florida. He was a witty, loving, protective, and compassionate son, brother, grandson, uncle, cousin, and friend to many. He was affectionately known as “Powerhouse”, a nickname given to him by his late grandfather due to his overwhelming confidence in himself. Jeff was born in Red Bank, New Jersey to Susanne and Joseph Proctor on June 21st, 1978. He spent some of his younger years in New Jersey before moving to Georgia in 1990. Jeff was very active in numerous sports including baseball, football, MMA, soccer, and earned a black belt in Isshinryu Karate. He attended Camden County High School where his greatest passion was leading his teammates on the soccer field and where he made so many of his life-long friends. After high school he became involved in the food and beverage industry and attended bartending school and learned everything he could about cooking various types of cuisines. He quickly realized that cooking was an untapped talent he possessed and cherished making people happy through the meals he created and the conversations he had with so many of his customers. Whether working as a cook, kitchen quarterback, or restaurant manager he always performed with an undeniably strong work ethic. In April of 2019, Jeff moved to Ocala, Florida to help care for his father who required major surgery. Due to his compassionate and protective nature he knew, without a doubt, he needed to uproot his life and relocate to ensure he would be available to provide care for his parents. In his spare time, Jeff enjoyed playing golf and bowling with friends. His competitive nature made him strive for a perfect 300 game and although he never reached that goal, he came close. He also enjoyed coloring, decorating pumpkins, and building legos with his precious niece CJ whom he adored and always bragged about. He often talked about and looked forward to meeting his nephews Austin and Wyatt who live in Texas. Jeff is survived by his parents Susanne and Joseph Proctor of Ocala, Florida. His older brother Joe Proctor and sister-in-law, Brandi Proctor of Corinth, Texas. His baby sister Jennifer Wright and brother-in-law James Wright of St. Mary’s, Georgia. His maternal grandparents Angelo and Catherine LaBruno of The Villiages, Florida . Several Aunts and Uncles; Candy (Jeff’s Godmother) and Bill Frank, Cathie and Bill Livesey, and Jill and Bill Roth. His beloved niece Cylee-James (CJ) Wright and his nephews Austin and Wyatt Proctor. Cousins Denise, Jason, Peter, and Cheryl Ziemak, Katie, William and Kristen Livesey, and William Frank. Jeff is preceded in death by his paternal grandparents Stanley and Constance Proctor and his Aunt, Marie Ziemak. Jeff had a heart of gold and was extremely protective of his loved ones, especially his parents. He was loved by all and will be forever missed. Although his wings were ready, our hearts were not!

Jeffrey &#8220;Jeff&#8221; Michael Proctor, 43, passed away unexpectedly on September 12th, 2021 at his home in Ocala, Florida. He was a witty, loving, protective, and compassionate son, brother, grandson, uncle, cousin, and friend to many.... View Obituary & Service Information

The family of Jeff Proctor created this Life Tributes page to make it easy to share your memories.

Send flowers to the Proctor family.