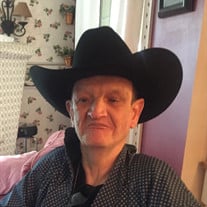 James Woodrow Lindsey, 73, of Ocala, Florida passed away on Friday December 3, 2021 at 5:58 a.m. at Advent Hospital. James, who was known to family and friends as Jimmy or Jimbo, was born in Chicago, Illinois to Carter and Helen Lindsey on August 10, 1948. Jimmy was a cowboy loving soul. You would not catch him without his hat on every day. " Sexy Cowboy" was what he liked to be called! He loved watching westerns on television. When he was younger you could find him in his bedroom playing with his pots and pans, stacking and re-stacking them. He loved working with tools, taking things apart and putting them back together. As he got older though that became harder for him to do. Jimmy was a true dog lover, especially little dogs that could sit on his lap or that he could carry around with him. He would practically pet the hair off the dogs he loved them that much! As a young man he loved when his mom and her girlfriends would sit around the table having coffee and telling stories, you could always find Jimmy there enjoying coffee and laughing right along with them. His mother's best friend, Norma Jean, was a very favorite person of Jimmy's. He loved her and she was a special part of our whole family. One thing he didn't love so much was the little kids coming in his room wanting to play, he had no time for that foolishness. He did love his family though and enjoyed having people around him. He was a sweet soul, so mild mannered and kind. He was a gentleman. He loved going to church and went for many years with his niece Kelly and her husband Ed. He knew very well about Jesus and loved singing and praying to God. He would fold his hands and bow his head and we know God heard every word. The last few years of Jimmy's life brought a new friend into it who soon became his best buddy. Jimmy loved going in Willard's truck to Dunkin Donuts and taking long drives down bumpy roads! He finally had someone to sit on the couch with him and watch his westerns and Adam-12 ( Jimmy loved old television shows.) When his brother Jerry passed in July of this same year, Jimmy took it pretty hard. It's been difficult for him since losing his brother and we believe they are together again with their mom and dad and all his family and friends that have gone before him. As we said for Jerry, until they meet again, well, they have met again and will now have eternity together in heaven. We love you Jimmy! Your family. Jimmy is survived by his sister, Mary Lee Lindsey, a niece, Kelly Paradiso and her husband Ed Paradiso, nephews, Kevin Morris and Michael Morris, as well as great-nephews and nieces, Noah Paradiso, Carter Paradiso and his wife Sammie Paradiso, Roman Paradiso, Mia Morris and Spencer Morris, all from Ocala, FL and also multiple cousins. He was preceded in death by his beloved brother Jerry Dale Lindsey, a sister, Alaine Fay and another brother Thomas Martin Walker. Funeral services will be held at Roberts of Ocala Funeral and Cremations on Tuesday December 7, 2021 at 11a.m.. Burial will follow at Anthony Cemetery in Anthony, Florida.

James Woodrow Lindsey, 73, of Ocala, Florida passed away on Friday December 3, 2021 at 5:58 a.m. at Advent Hospital. James, who was known to family and friends as Jimmy or Jimbo, was born in... View Obituary & Service Information

The family of James "Jimmy" W Lindsey created this Life Tributes page to make it easy to share your memories.

James Woodrow Lindsey, 73, of Ocala, Florida passed away on Friday...

Send flowers to the Lindsey family.