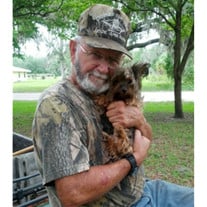 Hubert Leroy Williams, 85, of Dunnellon, Florida, passed away in Munroe Regional Medical Center surrounded by his family on December 30, 2017. Hubert was born November 11, 1932 in Ocala, Florida to Dennis and Nellie (Ratliff) Williams. He graduated from Dunnellon High School in 1952. He served in the United States Air Force for four years as a jet mechanic at Eglin Air Force base in Valparaiso, Florida. On August 1, 1953, he married his high school sweetheart, Hazel Hamic. In 1974, Hubert and Hazel opened Badcock Furniture in Dunnellon where he worked until he retired. Hubert was an avid hunter and fisherman, and he enjoyed both immensely during retirement. He also enjoyed tinkering in his barn, and cooking for his family. Hubert shared his love and expertise of the outdoors with many. Hubert is survived by his wife Hazel, sons John(Teresa) Williams, Robert(Susan) Williams, all of Dunnellon; six loving grandchildren, Dennis(Tonya) Williams Kyle(Paige) Williams, Jordan(Tiffany) Williams, Brooke Williams, Victoria(Tyler) Wood, and Shane Williams. Hubert also had six great grandchildren Trent, Aubrey, Kayden, Avery, Bristol, and Ella. Funeral service and celebration of life service will be held at First Baptist Church of Dunnellon, 20831 Powell Road, Dunnellon, at 1:00 pm, Thursday, January 4th, 2018 with Pastor Russ Randall will be officiating. The family will receive friends on Wednesday, January 3rd, 2018 from 5:00 pm to 7:00 pm at Roberts of Ocalas Downtown Chapel in Ocala, 606 SW 2nd Avenue, Ocala, FL.

The family of Hubert Leroy Williams created this Life Tributes page to make it easy to share your memories.

Send flowers to the Williams family.