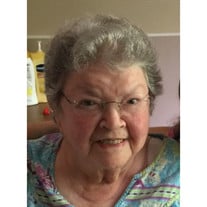 After a lengthy struggle with physical health issues, Helen Brinkley Lawton went peacefully to be with the Lordon Saturdayevening, July 14, 2018 at Ocala Regional Medical Center. She was surrounded and supported by her close family members. Most all who knew her, including her family, knew that her first love was music. She was an accomplished musician and learned to play the piano as a young girl, sang in church choirs, and majored in music education at Western Kentucky University. She especially loved to play her beloved Yamaha C3 grand), and called it her therapy after her husband of 53 years, Gene, died in 2004. She taught cello for many in the community, sang in the First Presbyterian and First Christian church choirs, played in the original Ocala Festival Orchestra, Ocala Symphony, Aeolian Players, and in many other chamber music groups, as well as the pit orchestra for many Ocala Civic Theatre and First Baptist Church productions. She taught music in Kentucky and West Virginia before moving to Ocala with her husband and son in 1959. In Marion County, she taught at South Ocala Elementary and then did social work, taught high school, and organized a chorus at the McPherson School for Girls. She also taught elementary music for several years and was used in early integration efforts in the 1960s by traveling to outlying minority schools to teach music. She also taught reading and compensatory education at Forest High School for 15 years. She was an accomplished seamstress and, before computerization, ran her own monogramming business for many years. She outfitted her husband and sons with countless shirts, pants, pajamas, suits (even leisure suits), sport coats, and ties, and machine-embroidered and monogrammed untold thousands of towels, sheets, athletic jackets, and other articles of clothing. She was born in Kannapolis, North Carolina in November 1930 as the sixth of seven children. She is survived by her three sons, Tom (Ann) of Anthony, Richard (Heather) of Gainesville, and Steve (Kathy) of Belleview, two grandsons, four great-grandchildren, and one sister, Janice McCombs of Waynesboro, Virginia. The family will receive friends at Roberts of Ocala Downtown Chapel onThursday, July 19, 2018 from 5-7 pm.The family will gatheron Fridayat Florida National Cemetery at 10am in Bushnell for a brief graveside service. Flowers accepted, or donations may be made to the First Presbyterian Church of Ocala Music Fund.

After a lengthy struggle with physical health issues, Helen Brinkley Lawton went peacefully to be with the Lordon Saturdayevening, July 14, 2018 at Ocala Regional Medical Center. She was surrounded and supported by her close family members. Most... View Obituary & Service Information

The family of Helen B Lawton created this Life Tributes page to make it easy to share your memories.

After a lengthy struggle with physical health issues, Helen Brinkley...

Send flowers to the Lawton family.