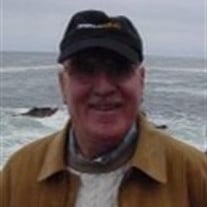 George MacKay "K-Bo" Drake, Sr., 87, of Dunnellon, FL, went to the Lord Thursday, May 12th, 2022, after having a "larger than life" presence on earth. "Let the Bird Fly" as he would say. K or K-Bo knew no stranger and treated all with love, loved telling stories and was a terrific joke teller. He had such a positive outlook and would find humor in any situation. He was a wonderful husband to his wife, Scottie, and a loving father and grandfather. He was born on September 21st, 1934, in Ocala to his parents Trusten Polk Drake, Jr. and Annie MacKay Drake. K's family is very proud of his career and his family's Florida history. K along with his brother, Trusten (Trusty) P. Drake, III, had Drake Construction (Contracting), which built many landmark buildings in Ocala, on the University of Florida campus and throughout Florida. K & Trusty's dad, Trusten P. Drake, Jr. (TP2), served on the Florida State Road Board in the mid 1900's and sponsored Pine Street coming through Ocala, which connected Old US 441 & Old US 301. TP2 had the "Big D Restaurant" on Pine Street back then. K & Trusty's great-grandad, James E. Drake started, just after the civil war, one of the first large orange groves in Central FL, Drake Point Grove, Yalaha, Lake Harris, FL. The grove originally used steamboats to ship the fruit up the Ocklawaha River to Jacksonville. That was so until steam engine trains were used to freight the fruit after James Drake as president of Gulf Railroad, brought the first railroad line south of Jacksonville, to Eustis. K & Trusty's grandad on their mother's side, George MacKay, was an early Ocala engineer & builder that build many landmark buildings in the early 1900's that remain. He also developed the first practical phosphate crushing machine, which was used in Dunnellon's boom days for phosphate mining. K, Trusty, and their father have been instrumental in the historic Drake Ranch, along the Withlacoochee River. K Drake graduated from University of Florida in Building Construction in 1959 after graduating from Ocala High in 1952. He served in the army and played tennis on their traveling team. K is survived by his three children with his first wife, Durlene: Ann Louise Drake (Chris Potter), Trusten "Holland" Drake (Barbara, Kendall & Dylan) and George "Mackay" Drake, Jr. (Tracy, Katherine Scott, George "Mackay" III). K's wife, Barbara "Scottie" Drake (Marc Smith (Ashleigh, Rachel)) & Cheri Reynolds (Tom, Marshall)). K's family will miss all the excitement he brought to their lives. A graveside service will be held at Greenwood Cemetery, 1393 NE 3rd Street, Ocala, FL at 10:30 AM on Friday, May 20th. Casual attire suggested. In lieu of flowers, donations may be made to Interfaith Emergency Services Inc; P O Box 992, Ocala, FL 34478

George MacKay "K-Bo" Drake, Sr., 87, of Dunnellon, FL, went to the Lord Thursday, May 12th, 2022, after having a "larger than life" presence on earth. "Let the Bird Fly" as he would say. K or K-Bo knew no stranger and treated all with love,... View Obituary & Service Information

The family of George M Drake Sr. created this Life Tributes page to make it easy to share your memories.

Send flowers to the Drake family.