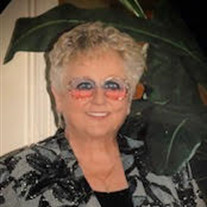 Florence Menard Thompson of Ocala, Florida passed away at the age of 78 on August 4, 2021 after complications related to the COVID virus. Florence was born January 17, 1943 in Chicago, Illinois. She was the daughter of the late Joseph and Mary Menard. She was predeceased by her sister Bobbie Meheula and survived by siblings Jolene, Joseph and Victor. Florence is also survived by her spouse of nearly 60 years, Douglas, and her children Rebecca Turner and her husband Drew , Douglas Thompson and his wife Betty and Rachel Patten and her husband Sean. as well as 8 grandchildrenAndrew, Adam, Chelsea, Zachary, Aaron, Austyn, Christopher and Alex and 11 great grandchildren and more on the way as she recently learned a new addition will be arriving in February, 2022. Flo and Doug raised their family in New Hampshire until their retirement in 2007; moved to Ocala and began a new adventure with new friends who have become family. In New Hampshire she was known as Mom, Mrs T, Gram and Great Gram and the Master of French toast. Her house was known as the place where all the friends wanted to have dinner. Mrs. T,who loved to cook and bake, always had a great meal, baked goodies, buttered popcorn and a movie to watch and games to play. This tradition continued for over 38 years as a Gram and Great Gram. She spent the past 32 years navigating through life while enduring pain from injuries she endured in an automobile accident in 1989; she never floundered, would never give up and had a smile and a story for every person she met. She never complained. This was witnessed through the many friends whom she considered family who have paid their respects while reminding us she was their angel. The ultimate compliment to Florence is that there would be a line in heaven to welcome her home. Florence was known as a woman who could light up a room with her smile, warmth, love and generosity. She was often known as the "golf cart angel" who would deliver meals and baked goodies throughout her park. As far as she was concerned no one would go without; always putting others needs before her own. Florence was always ready for a game of cards and often hosted evenings filled with laughter and countless hours of games. She will be missed by many but will live on in the better parts of all of us.

Florence Menard Thompson of Ocala, Florida passed away at the age of 78 on August 4, 2021 after complications related to the COVID virus. Florence was born January 17, 1943 in Chicago, Illinois. She was the daughter of the late Joseph and Mary... View Obituary & Service Information

The family of Florence Thompson created this Life Tributes page to make it easy to share your memories.

Florence Menard Thompson of Ocala, Florida passed away at the...

Send flowers to the Thompson family.