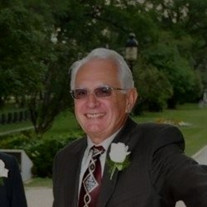 EDWARD STANLEY BIEDRICKI II July 1, 1940 - July 13, 2021 OCALA - Edward Stanley Biedricki II passed away at the age of 81 in Ocala, Florida. He was predeceased by his father Edward J. Biedrzycki, of Passaic, NJ. He was also predeceased by his mother, Josephine and stepfather, Stanley Mientus, late of Clifton, NJ. He leaves behind his loving wife and partner of 19 years, Adele Evans-Biedricki (nee Aquin), of Ocala, FL; and his son Edward Michael (Eddie) and daughter-in-law Mary Ann, of Hopatcong, NJ. Ed grew up in New Jersey and graduated from Passaic Senior High School. He became interested in amateur radio, and at age 15 he received his first HAM Radio operator license and call sign (WB2UKX). During his lifetime he remained continuously and passionately active with amateur radio, both as a hobby and in his chosen professions. He was an electronics specialist, and some would say genius. He spent hours and days 'working' international radio events and contests. He made many like-minded friends over the air around the world, many of whom he became friends with and welcomed in his home and visited in their home country. He was most proud to share his skills with his son, Eddie (N2QJN), and enjoyed going together to HAMFESTS. After graduating high school, Ed made the decision to serve his country, in 1957 enlisting into the United States Marine Corps, as a Radio Signalman, on the USS Taconic. Over the next six years he worked hard and learned a lot about the world, and himself. He was honorably discharged in January 1964. As a civilian he utilized his skillsets to work for major companies as an electronics specialist and had his own businesses. By his mid-forties, he found himself living, working, and enjoying life in Daytona Beach, FL. It was then that Ed enlisted into the Army Reserve. His passion and natural talents as a radio operator earned him a rapid promotion to Sergeant. He also earned his aviation crewman wings, during his service within Aviation. However, Ed had more to offer and desired more of a challenge. He sought out more elite opportunities and was rewarded when he was selected as a Special Forces Candidate. While serving in Company A, 3rd Battalion, 20th Special Forces Group, Ed's self-discipline and attention to detail reinforced his strong desire to succeed. He went on to earn his silver airborne wings and the coveted "Green Beret". Ed entered back on active duty, once again, as a Special Forces Communications Sergeant and served with Company A, 3rd battalion 20th Special Forces Group, until his retirement. His ability to master the lost art of MORSE Code set him apart from his fellow Green Berets. He quickly gained the respect and admiration of his peers. His superior abilities as a Special Forces Communications Sergeant become known throughout 3rd Battalion. His unintentional notoriety quickly warranted additional deployments on many difficult missions that relied heavily on his gift with radio communications. Ed welcomed the challenge. He never turned down an opportunity to share his knowledge and skills with anyone who was interested. To those who knew him well, he will always be remembered as a true Quiet Professional. . De Opresso Liber Ed… When retired, Ed spent hours working on his home and property, staying in contact with his friends and family, and travelling wherever and whenever he could. Realizing that taking a Spanish class would benefit his travel plans, Ed registered at CFCC. Adele had registered as well as a benefit for her work. This is where Ed and Adele first met, at a perfect time in each of their lives, and knowing that the other was 'the one' they had been looking for. They married in Winnipeg, Canada where Ed was overwhelmingly loved and always welcomed by Adele's family and friends. Ed was respected and appreciated for who he was, how he lived his life, and how he treated others. He was a kind, loving, and generous person, a real 'top shelf' gentleman, and the most wonderful husband. A "Celebration of Life" will be held at Roberts of Ocala Downtown Chapel, Ocala, Fl on August 28, at 11:00 AM. To offer words of comfort, share memories, or post tributes, please visit Ed's memorial page at robertsfuneral.com A Funeral Mass is planned to be held at the Saints Peter and Paul Polish National Catholic Church, 126 River Dr., Passaic, New Jersey, DATE/TIME TBD. Ed will be laid to rest with full military honors at Florida National Cemetery, Bushnell FL, FUTURE DATE/TIME TBD.

EDWARD STANLEY BIEDRICKI II July 1, 1940 - July 13, 2021 OCALA - Edward Stanley Biedricki II passed away at the age of 81 in Ocala, Florida. He was predeceased by his father Edward J. Biedrzycki, of Passaic, NJ. He was also predeceased... View Obituary & Service Information

The family of Edward S Biedricki created this Life Tributes page to make it easy to share your memories.

Send flowers to the Biedricki family.