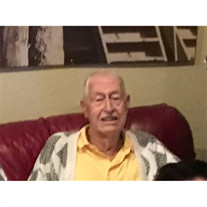 Donald Lee OLaughlin, longtime resident of Ocala, passed away Thursday, September 27, at the age of 88. Don was born February 23, 1930 in Springfield, Illinois. He was one of three children to Richard and Doris OLaughlin. In the summer of 1960, Don moved his wife and two young boys to Ocala. They had barely arrived when they were introduced to a totally unfamiliar weather event - Hurricane Donna. The storm battered the state, causing widespread damage in Marion County. According to news reports, it was the worst storm to hit Florida until Andrew in 1992. The family stuck to their new life in Ocala, and Don took a job at Marion Hardware (later Context Marion) downtown near the square. During his years there, he went from stock clerk to purchasing agent and, eventually, assistant manager. He later worked in sales at Dixie Millwork. Throughout his career, he earned the respect and admiration of his customers. All his life, Don loved adventure. As a teen he took flying lessons and made his first solo flight at 17. In later years, he was an avid sailor - on his own boat and on sailing excursions to Caribbean Islands with friends. He was an active member of the Ocala Power Squadron and taught many courses on navigation, seamanship and small boat handling. But the air and sea werent the limits of Dons love of life. During their long marriage, he and his wife, Alberta, traveled to all 50 states. Don lived his life to the fullest. He loved good times, funny stories and a wide-ranging cuisine. He made friends easily and his presence livened up any gathering. He will be sorely missed. Don was preceded in death by his parents, his brother, Richard, and sister, Maurietta. He is survived by his wife of 68 years, Alberta, sons Jerry (DeLane), Ron (Brenda Smith), grandchildren Christopher OLaughlin (Jennifer), Kimberly Glancy (Sean), Valerie Schwankl (Adam), and four great grandchildren. As he wished, Don will be cremated and his ashes scattered in the Gulf of Mexico. The family will receive visitors from 5 to 7 PM Friday evening, October 12. A memorial service will be held at 10 AM, Saturday, October 13. Both the visitation and memorial will be held at Roberts of Ocala Downtown Chapel, 606 S.W. 2nd Avenue Ocala, FL 34471.

Donald Lee OLaughlin, longtime resident of Ocala, passed away Thursday, September 27, at the age of 88. Don was born February 23, 1930 in Springfield, Illinois. He was one of three children to Richard and Doris OLaughlin. In the summer of 1960,... View Obituary & Service Information

The family of Donald Lee O'Laughlin created this Life Tributes page to make it easy to share your memories.

Send flowers to the O'Laughlin family.