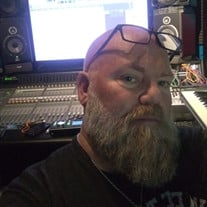 Christopher Eugene Hinson, 57, of Ocala, Florida, passed away on August 31st, 2021, at Ocala Regional Hospital. Chris was born in Charlotte, NC to Jane Hayes Hinson and Franklin Eugene Hinson on September 24th, 1963. He went to high school at Greenwood High and graduated in 1981. He went on to earn an Associates Degree in Machine Technology from Piedmont Technical College. He served in the US Army from 1989 to 1994, which included serving as a combat soldier in Desert Storm. His greatest passion was playing the bass guitar. He played bass with many bands including, but not limited to, Joker, Magic, Atalaya, Torn and most recently Rusty VooDoo and Tracy Parrish. He and his wife, Valerie, enjoyed riding Harley Davidson motorcycles together. Chris is survived by his sons, Mike Hinson and Ryan Hinson of Greenwood, SC, Parents, Jane Hayes Hinson and Franklin E Hinson, Grandson, Jace Hinson, sister, Beth Wilson, sister-in-law, Angel Hinson, nephews, Jesse, Austin and Cameron Hinson, Connor Wilson, and niece, Logan Williamson. He is preceded in death by his brother, Jeff Hinson. Chris' beloved wife, Valerie Hinson, passed away 18 hours after him on August 31st. Funeral service will be held at Roberts Downtown Chapel in Ocala, Florida on September 7th at 6:00 pm. Burial will follow at The Florida National Cemetery for Veterans in Bushnell, Florida. Visitation will be held at Roberts Downtown Chapel on September 7th from 4 - 6. Roberts of Ocala Funerals and Cremations will be handling the funeral arrangements. Memorial Donations may be made to Disabled American Veterans, PO Box 14301, Cincinnati, OH 45250-9900.

The family of Christopher Hinson created this Life Tributes page to make it easy to share your memories.

Send flowers to the Hinson family.