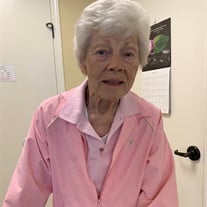 Carol Lois Voell (née Peterson) passed away peacefully at her home in Florida with her beloved husband Les at her side on March 18, 2022. Born in Duluth, Minnesota, Carol was the only child of Lois and Marshall Peterson. She was the grandchild of Caroline and Johann Wesenberg, niece of Florence and John Wesenberg, Marguerite and Mitchell Spearin and grand uncle and aunt Charles and Ellen Pierson. Cousins were Ashley Todd Partridge (aka Carol's "sister"), Rodman and Robert Spearin (aka Carol's "brothers"). She is survived by her husband of 69 years, Lester (Les) Robert Voell, their daughters and families, Kathleen (Kate) Lois Voell-Moran and husband James Moran, Karen Leslie Pratt and husband Christopher Pratt, son David Lester Voell and wife Janine Voell, grandchildren, Karolyn (Karly) and husband Alex Swaim, Marcus and wife Christina Pratt, Kirsten and husband Nikita Shoshensky, Cameron and wife Daria Voell and the youngest, Mariska Voell. Families who she stayed in close contact, Hautman, Mairs, Spearin, Wesenberg and Voell plus friends too numerous to name. During their 69 golden years of marriage, Carol and Les shared many adventures as a family, beginning with their time in Minnesota, up to a transfer out East, where Carol, Les and the family began a second chapter in New Jersey. Although she held many interesting jobs during her long career with the state of New Jersey, Carol demonstrated her innate ability to motivate others best as a Career Counselor for Brookdale College where she held her own brand of resume workshops for students and job seekers. After she and Les retired, the last chapter of Carol's life was spent travelling between homes in New Jersey and Florida, where they lived their dream of becoming Snowbirds travelling back and forth every 6 months for 26 years! A devoted mother of three and grandmother of five, Carol loved relating stories about herself and her family which often took an embarrassing twist! Carol will be remembered for her humor and annual Christmas Letter mailed out to 250 friends and fans, but only after being 'edited' by her family! Carol was a member of the Rumson Presbyterian Church in New Jersey for over 30 years, where she treasured her spiritual community. Her faith and love for God was evident by her generosity and optimism for mankind and animal companions too! She often said that God had a sense of humor and that she was proof of it! In the end, she was blessed with a glorious life of gratitude that was well lived and loved. She will be missed until we meet again!

Carol Lois Voell (née Peterson) passed away peacefully at her home in Florida with her beloved husband Les at her side on March 18, 2022. Born in Duluth, Minnesota, Carol was the only child of Lois and Marshall Peterson. She was the grandchild... View Obituary & Service Information

The family of Carol Voell created this Life Tributes page to make it easy to share your memories.

Carol Lois Voell (n&#233;e Peterson) passed away peacefully at her...

Send flowers to the Voell family.