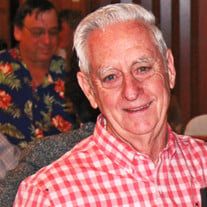 Andrew (Andy) John Rose Jr., age 83, of Ocala,Florida, left this Earth to be in Heaven on January 21st, 2022 in Ocala, Florida. Andy or Jack as his childhood friends and family called him) was born March 17, 1938 in Akron, Ohio, son of Andrew and Mary Rose (Williamson). The family, including younger sister Pat (Biggs) moved to Alabama where Andy spent 1st and 2nd grades then the family, now including sister Kathy (Short), moved to Hialeah, Florida. He graduated from Hialeah High School in 1957 while working at the Hialeah Veterinary Clinic, Miami Herald, and taking shop where he learned his love of woodworking. Many happy days were spent fishing, working on cars, and helping his father in his orchid greenhouse. He left Hialeah in 1957 to attend the University of Florida where he met his future wife Jeanie in a Dairy Science class. He served in the Army 1961-67 stationed out of Ft. Riley Kansas where his daughter Debra was born. After returning to the University after service he completed graduate school in what was the Department of Fruit Crops (Horticulture) with his specialization in Citrus Research. He then began a lifelong journey that introduced him to so many wonderful friends, colleagues, and countries. He took a job as an extension agent in Lake County then began working for Libby McNeal and Libby (Libby's) where he did research on citrus in their Florida groves and then pineapples in South Florida and Belize. He retired from Libby's in 1984 and returned to his extension roots as Director of Extension in Citrus county until 2000 when he went to Sumter County, retiring in 2004. He remained active in the Rotary during most of his career. In retirement he enjoyed growing and tending to his pineapples and many orchids, woodworking in his shop, traveling with his sweetheart Helen, judging school science projects, and especially serving with his church family wherever he lived. Those who knew Andy knew of his loyalty and dedication to "find the answers" and never turn down an opportunity to meet and befriend new people. Andy is survived by his daughter Debra Rose of Spencer, Indiana and his sweetheart Helen Grimes of Ocala. He is preceded in death by his wife Jeanie A. Rose (Patrick), his mother Mary W. Rose (Williamson), his father Andrew (Andy) J. Rose Sr., his sister Pat Biggs (Rose), and his sister Kathryn Short (Rose) Memorial donations may be made to The Michael J. Fox Foundation for Parkinson's Research, P.O. Box 5014, Hagerstown, MD 21741 or online, and the University of Florida Horticultural Sciences Department (payable to UF Foundation, Memo: Rose Memorial), P.O. Box 110170, Gainsville, FL 32611 or online at: ufgive.to/ajrose Andy's kindness, knowledge, friendship, and love of life will be missed by all who knew him but we take comfort that he well knew the love of God, his wonderful sweetheart, the many friends and family, and his daughter Debra.

Andrew (Andy) John Rose Jr., age 83, of Ocala,Florida, left this Earth to be in Heaven on January 21st, 2022 in Ocala, Florida. Andy or Jack as his childhood friends and family called him) was born March 17, 1938 in Akron, Ohio, son of Andrew... View Obituary & Service Information

The family of Andrew John Rose Jr. created this Life Tributes page to make it easy to share your memories.

Send flowers to the Rose family.