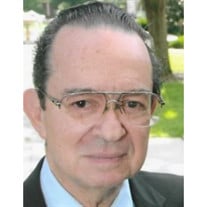 Alfredo Ruiz, 82, of Ocala, Florida, passed away on April 25, 2018, at the Brandley House in Summerfield, Florida. Alfredo was born in Veracruz, Mexico to Matilde Osuna and Gonzalo Ruiz on November 3, 1935. After receiving an education at a private school in Mexico, he went on to attend university in Monterey, Mexico. In 1954, at the age of 19, Alfredo came to Florida and studied for one year at Lake Worth High School to learn English. Alfredo studied hotel and restaurant management at Florida State University where he earned his bachelors degree. While still in college, he met Elsie Cullison, and the two got married on September 3rd, 1957. Alfredo purchased Randys restaurant on Silver Springs Boulevard where he worked with his family from 1967 to 1981. After Randys, he became a real estate broker. Then, in the mid-late 1980s to the early 1990s, Alfredo owned and operated Deans Barbeque for about seven years. Before retiring in 2005, Alfredo worked for the Florida DOT for 12 years. Alfredo is survived by his wife, Elsie Ruiz; his three sisters; his six children, including his daughter, Cindy Lundman, and his sons, Alfredo Ruiz Jr., Marco Ruiz, Daniel Ruiz, Michael Ruiz, and Gregorio Ruiz; his eight grandchildren; as well as his six great-grandchildren. He is preceded in death by his parents as well as his brother. Graveside funeral service and burial will be held at Woodlawn Cemetery (1501 NE 3rd St, Ocala, FL 34470) on Saturday, May 5th, 2018 at 11:00 am. The Ruiz Family would like to convey our appreciation for the outpouring of sympathy from friends and neighbors during this difficult time.

Alfredo Ruiz, 82, of Ocala, Florida, passed away on April 25, 2018, at the Brandley House in Summerfield, Florida. Alfredo was born in Veracruz, Mexico to Matilde Osuna and Gonzalo Ruiz on November 3, 1935. After receiving an education at... View Obituary & Service Information

The family of Alfredo Ruiz created this Life Tributes page to make it easy to share your memories.

Send flowers to the Ruiz family.